Dropbox is one of the leading cloud storage providers. The company’s core solution includes storage, auto syncing, shareability of data, content management and admin control. Revenue is earned from paid subscription plans for individuals and businesses. The company is headquartered in San Francisco, California. It was founded in 2007 as Evenflow, Inc. and become public in March 2018.

US accounts for 51% of the company’s revenue, rest is earned from international markets with no country abroad accounting for more than 10% of the total revenue. Overall, 71% of revenue is earned in USD. Dropbox platform is blocked in China since 2014.

Dropbox’s customers primarily include individuals, professionals and small to large businesses across various industries. Company has over 600 million registered users on its platform out of which 14.3 million are paying users and 80% of the paying users use Dropbox for work. Around 450,000 teams globally use Dropbox business and more than 750,000 developers have built applications on Dropbox. No customer accounts for more than 1% of the revenue. The company has made various acquisitions since 2012 with the largest and most recent being the $230 million acquisition of HelloSign, an e-signature and document workflow platform in January 2019.

Dropbox’s foundations were laid by Drew Houston, current CEO, for his personal use to store data while he was a student at MIT but later decided to commercialize the concept. Another MIT student, Arash Ferdowsi joined Drew Houston and together they founded Evenflow, Inc. in 2007. The company was renamed Dropbox, Inc. in 2009.

In December 2009, Apple’s Steve Jobs offered to buy Dropbox, but the offer was turned down by the founders. Company’s user base has increased from 1 million in April 2009 to over 600 million as of 2019. Company was named startup of the year by TechCrunch in 2012 and later in 2016, the company was ranked no. 2 in Forbes Cloud 100 list. In 2017, Dropbox reached the $10 billion valuation and ranked as 8th most valuable US startup by Business Insider.

In 2012, the company announced a new feature that would automatically upload photos and videos from phones, cameras, etc. to the drive. In 2014, it announced partnership with Microsoft to integrate Dropbox with Microsoft Office applications and web version. Earlier company was dependent on Amazon S3 for its storage needs but in 2016, Dropbox announced that 90% of its user data was now stored in its own cloud infrastructure. In 2018, Dropbox partnered with Salesforce to improve its third-party integration to simplify workflow and achieve higher efficiency.

Competition is taking a toll

Spiceworks, a leading IT marketplace and research platform conducts a survey periodically that asks business IT decision makers about cloud storage adoption and preferred vendors. While adoption of most players has gone up, a clear winner has been Microsoft OneDrive. Between 2016 and 2018, adoption of OneDrive went up from 31% to 70%, a 39% increase as compared to a 13% increase in the case of Dropbox. We believe a key factor driving Microsoft’s growth is the network effect from the company’s Microsoft 365, Office 365 plans and SharePoint subscriptions.

Not surprisingly, google trends data also shows that the 12-month moving average trend for Dropbox peaked around the end of 2014 and since then has consistently declined while trends at One Drive and Google Drive have generally stayed consistent since mid-2016. 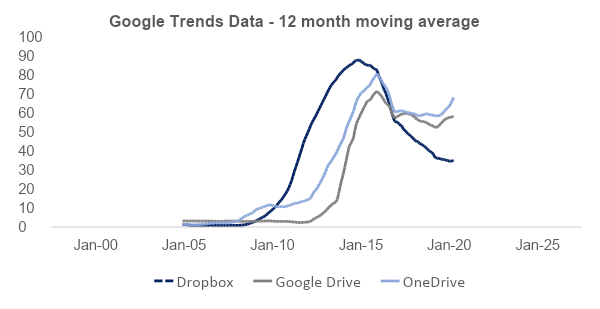 Other competitors are entering the industry and further commoditizing cloud storage space Newer entrants both in cloud storage but also in cloud-based collaboration space are offering large amounts of space as part of a suite of services that makes their offering highly compelling. For example, Facebook’s workplace offers 1 TB of storage space for just $4 per user per month along with a whole productivity suite while Amazon prime members get access to 100 GB of space for just $1.67 per month (charged annually). There are 112M prime members in the US or 54% of the population over 18. Clearly, having access to 100 GB of storage space for $1.67 potentially takes away a large cohort of entry level users from Dropbox even assuming some of the more demanding customers look for more features such as collaboration. Similarly, Apple offers its cloud storage service that works well for users with multiple apple devices.

Indeed, the company’s paying user growth as well as business teams growth has seen a substantial slowdown. In the recently completed fiscal 2019, the company’s paying user growth was just 12.6% as compared to 15.5% in 2018 and 25% in 2017 while growth in business teams was just 12.5% as compared to 33.3% in 2018 and estimated 40% in 2017. These growth numbers look more-bleak when considering that only ~2.6% of the company’s registered user base of 600M are paid subscribers. Despite the large group of unpaid users, the company has failed to gain momentum in converting them to paid users. 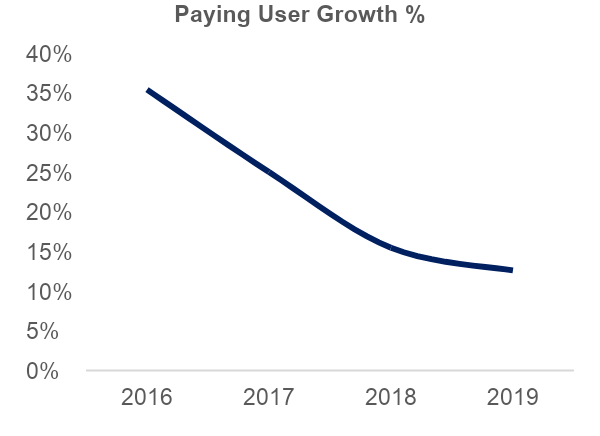 The company’s margins also seems to have peaked. Majority of the company’s margin expansion since 2016 has been a result of reduction in cost of revenue from bringing the server and data center infrastructure inhouse from 3rd party sources and also marginal operating leverage. While some of this margin upside has flown to the EBITDA line, a significant portion has been re-invested in R&D as the company needs to continually invest to keep its value proposition intact given competition from the likes of Microsoft and Google. The gain on EBITDA line lost momentum in 2019 with adjusted EBITDA margin expanding 60 bps as compared to 230 and 460 bps in 2018 and 2017 respectively. 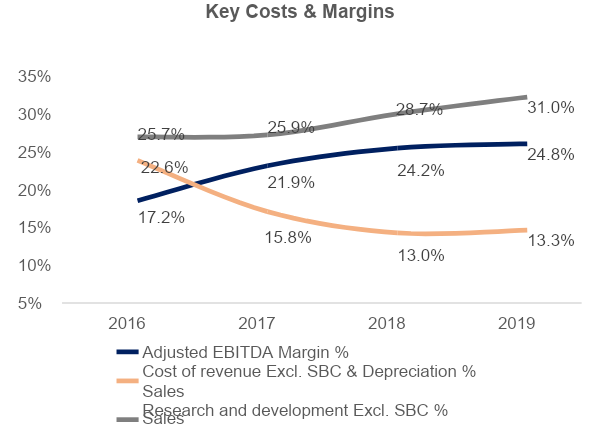 We believe the company’s revenue growth guidance of 14-15% YoY and non-GAAP EBIT margin at 17.5-18% for 2020 are overly optimistic even excluding any impact from coronavirus related shutdowns but are particularly rosy when considering the near stoppage of economic activity over the last few months.

Investors often bring up the opportunity to convert company’s large pool of non-paying users to paying users. At present, just 2.6% of the company’s registered user base is paying at the moment. While the number is low, it is important to note that the company’s paying user penetration has been in the low single digit rates for a few years now and whatever mild increases this metric did experience has stalled over the last 12 months. There is clearly a reason the company’s conversion of free to paid users is in the low single digits as compared to over 15% at Slack and Spotify. The low conversion points to a natural ceiling that the company will find difficult to break and we believe some of the investor optimism is misplaced. 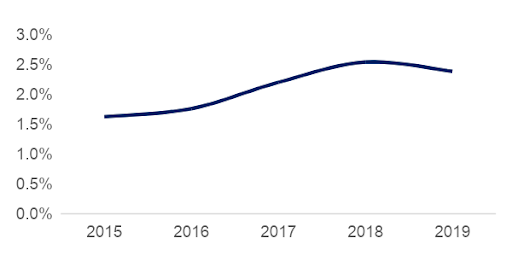 Focus on individuals, freelancers, micro and small businesses will bite in the present downturn Dropbox began its journey as a cloud storage solution for the individual and over the years has also added clients that are micro and small businesses. The company at this point has very few enterprises as its clients. The focus on smaller organizations puts Dropbox in a vulnerable position in the current downturn as freelancers or small-to-medium sized enterprises are likely to bear the major brunt of near cessation of economic activity. As per company’s own estimates, roughly 80% of its subscribers use Dropbox primarily for work.

According to a JP Morgan Chase study, the average small business in the US has just 27 days of cash buffer. US chamber of commerce and Metlife in a report published in the first week of April 2020 surveyed SMBs and found that around 25% of them have already temporarily shut shops and another 25% will do so in the coming weeks. Around 43% of the business surveyed can likely wait for six months before permanently shutting shops. While most lockdowns will be relaxed to varying degrees, consumer focused businesses and vendors to consumer-focused businesses are unlikely to see any noticeable rebound for the foreseeable future. Below is a snapshot of the grim survey data.

Source: US Chamber of Commerce and Metlife

Additionally, the recession will certainly make individuals and small businesses that are still looking to move to or retain cloud-based storage services opt for cheaper plans. We reviewed the entry level plans of various cloud-based storage providers and found that Dropbox provides one of the lowest storage size in free plans and its entry level premium plan starts at a higher dollar value ($11.99/user) as compared to entry level premium plans at $1.99/user. Please note that while Dropbox may be competitive on a cost per MB basis, individuals and businesses may have a preference for saving dollars than pondering over per MB cost in this economic environment.

ARPU gains are from old initiatives and price increases. These gains will be short lived

The company’s APRU has grown by a CAGR of 5% over the last two years. Prior to 2018, ARPU largely remained flat however growth in the recent years has come from some businesses customers rolling over to standard pricing from discounted pricing as well as last year’s price increases put in place as the company increased storage space and added additional functionality. Given already higher entry price points relative to competition and a difficult economy, we believe the company will have a tough time raising ARPU further for the foreseeable future.

The company’s CFO and FCF misinterprets its true cash flow generative capacity as it excludes some of its data center and other infrastructure costs that it chooses to lease and treats these items as finance leases which is included in cash flow from financing rather than cash flow from operations. As you can see below, our calculation of the company’s adjusted FCF is significantly below the company’s cash flow metrics as well as what ends showing up in most financial databases. Given the nature of the business, the company will have to continually spend on these leases or make outsized purchases. Either way, the company’s FCF generation will be below what the market believes.

It is not surprising then that a simple discounted cash flow analysis of the company when using the company’s cash flow presentation is almost exactly around the prevailing market price while when the model includes the finance leases, the prevailing market price turns out to be nearly 28% more than the fair value even assuming rosy growth assumptions.

Stock fails to incorporate increased competition, or the coronavirus led disruption that is about to be evident

Dropbox has outperformed QQQ since February this year after the company gave an overly optimistic picture for its long-term earnings power and beat consensus estimates. We believe this outperformance will be short lived as the company cuts its annual guidance in early to mid may when it is expected to report its Q1 results. Please note that the company’s stock is still below its IPO price and has failed to generate any shareholder value even in better times for the economy and the industry. In our model, we are estimating mid-single digit decline in FCF in 2020 as revenue growth stalls and expense deleverage takes place. We are conservatively assuming mid-single digit growth in FCF between 2021-23 even though the company could very well see flat to declining FCF as economy remains weak and competitive pressures intensify. We believe even baking in conservative estimates, Dropbox should trade 38% below prevailing stock price or at 12.5 per share vs over $20 stock at the moment.

Dropbox is expected to significant underperform over the next 2-4 years from a confluence of factors including a) lack of product differentiation leading to commoditization b) larger players with powerful moats investing and growing in the cloud storage/collaboration space c) macro-economic weakness to disproportionately impact individuals/SMBs, core target demo for Dropbox. We believe Dropbox’s stock fails to incorporate these risks and therefore we see a 38% downside even with conservative assumptions.

Buyout: Investors have talked about Dropbox as a takeover bet for a number of years. Possible suitors as per analysts have included Salesforce, Microsoft and even Apple. Salesforce has over the years acquired minority stakes in other public market companies such as Survey Monkey and Zoom so its investment in Dropbox could very well be passive in nature. Microsoft and Apple are building their own cloud storage offerings and while an acquisition of Dropbox brings them scale and cross selling opportunities, we think any suitor will wait for Dropbox story to falter before getting constructive. Nevertheless, we believe investors who are short the stock should monitor this risk.